Herbertstown became a mini-Cape Canaveral on Thursday with the launch of 10 bottle rockets!

To celebrate Space Week, the fifth and sixth class pupils designed and created bottle rockets in anticipation of Thursday’s launch date. The pupils had studied the space race earlier in the week and some of the designs took on an ‘Apollo’ theme. Others took a more original approach. In all, 10 groups created rockets.  The rockets were crafted using a 2 litre drinks bottle which was then adapted to meet the design of each group.

The rockets need to be half filled with water before a hose is fixed to them. Air is pumped into the bottle until the air pressure inside the bottle becomes too great. This pressure forces the bottle’s cap to release and the force of the escaping air & water helps the rocket to beat gravity and take flight.

On Thursday, members of third and fourth class were asked to give each rocket a score based on its design and then its performance in flight. The entire school came out to watch each rocket being launched and there was great excitement at each ‘lift off’! Congratulations to Group 1, who had the best overall score for their rocket. 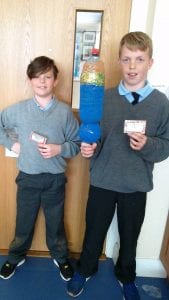