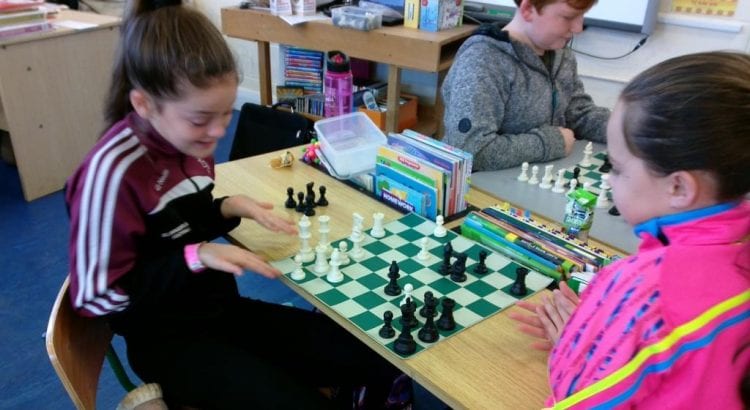 Today we came into school like normal. When everyone was in, Mrs. Heelan told us to clean off our tables. We had no idea why but she just said it was a surprise. After we cleared up everything she announced we were having a visitor. We’ve had all sports people coming to us but today we were having someone teach us chess. His name was John Alfred and he knew quite a lot about it. Some people knew how to play chess but some people had no idea how to do it.

He hd a big leather board which he hung on the wall and he also had some plastic chess pieces which he slotted onto the board. He taught us some history about the game. He then took some flat boards and pieces out of his bag. We were sorted into pairs and told how the pieces worked and what we could do with them. First we learned about the pawns. The pawns could only move forward and take diagonally. If they made it to the other side of the board it could turn into any other piece apart from the King. Then we learned about the Queen. This piece can be moved in any direction as far as it wants. We learned about the Rook and Bishop next. The rook can only be moved forwards, backwards and sideways. The bishop is a completely different story and can only be moved diagonally. Next we learned about the most complicated piece on the board, the Knight. The knight is unusual because it moves in L shapes. It is also the only piece that can jump other pieces. Last but not least the King. The king can only move one space at a time in any direction. It also can’t be captured. You must checkmate it to win. All the pieces have different points and probabilities:

We played a couple of games after this against each other. He stayed with us until 12 o’clock. And overall I found it quite fun and I’m sure everyone else did. We all said thanks to John and left. After this day we’re ordering a couple of own chess sets to play with in school. Chess is a great, unique game that I love and I hope you like it too.