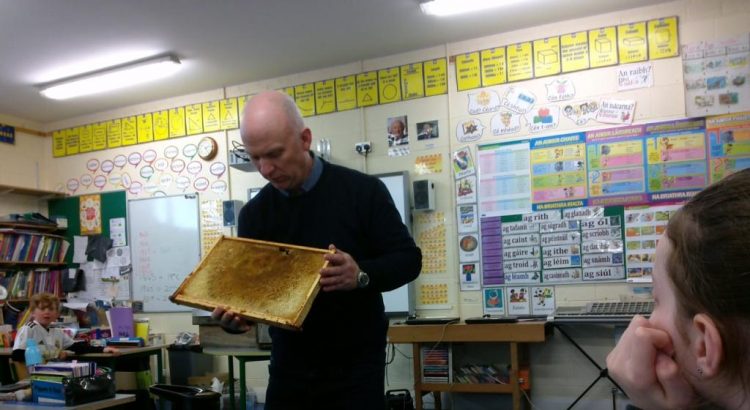 A bee man called Benny came to our school to talk to us about bees. He said bees are good for the environment but their population is slowly decreasing. He also brought in a hive to show us, the main parts of a hive are the brood chamber, the stand, the super and the frames. There are three types of bees, the queen and the worker bees who are the females and the males are called drones ,but the drones don’t work. A bee can travel up to 5 km for food. A good queen bee can lay around 2000 eggs a day. In winter bees don’t hibernate, they must fly every 6 weeks. If you happen to own a hive you must put a mouse guard in front of the bottom so mice don’t get in during winter. After winter most of the drones will be evicted from the hive because they barely do anything. When you get a queen bee you must clip her wings so she doesn’t fly away. You would find the queen bee in the queen cell which is located in the brood chamber. Benny said that he feeds his queen bee with something he calls royal jelly. It is important you stay quiet if you are near a hive so you don’t scare the bees away from the hive. About a week after Benny came to our school he sent down tests for us to complete. Erika got the highest score in the test. Tadhg, 6th Class

A bee man called Benny came to our school to tell us about bees. He said that they are actually good for the environment. A female bee is called the worker and the male bees are called drones. When the female bees get cross the male bees will be evicted from the hive. The total distance the bees covered to make a jar of honey is 100KM. To keep mice out over the winter we usually use a mouse guard. The Queen cell is found in the brood chamber. The Queen lays approximately 2000 eggs a day. We know the Queen bee from the rest because she is the biggest and a spot is painted with paint. The gap at the front of the hive is 9mm. The frame of honey in the super is made from timber and wax. Aoibhinn, 5th class.