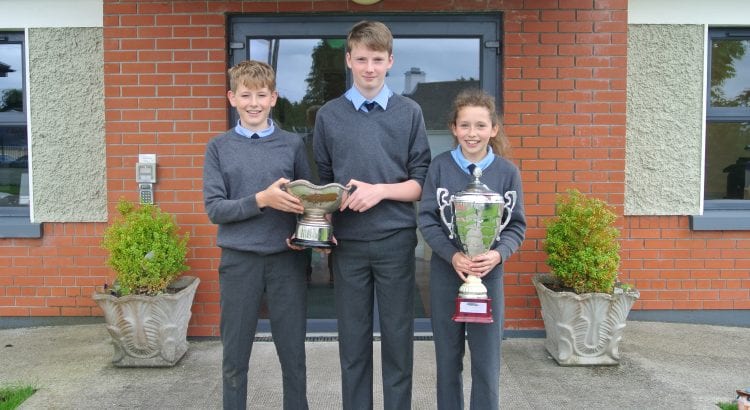 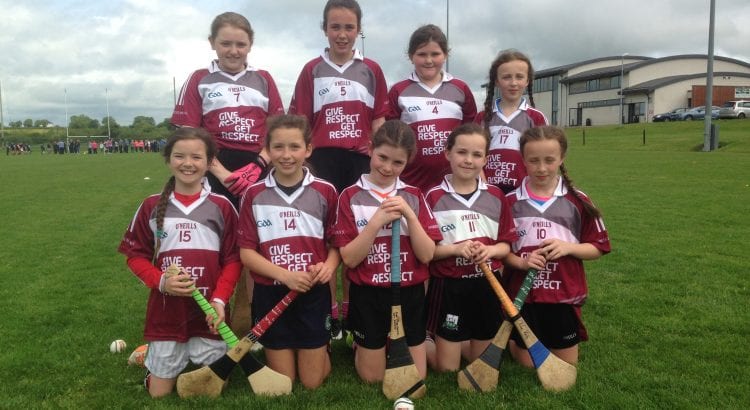 History was made this morning in Martinstown as the school’s camogie team claimed a south title at their first attempt.

Our camogie team travelled to Martinstown this morning having already claimed a couple of firsts for the school. It was the first year that the school entered a camogie team in the south division and following a blitz last week a place in a first final was achieved. Dozens of supporters joined parents and staff on the sidelines to cheer on the girls.

The match started at a frantic pace with Manister launching a few early attacks on the Herbertstown goal. It was the girls in maroon and white who registered the first score however as Aisling landed a free from the sideline. This spurred on the Herbertstown attack and some smart link up play involving Lauren and Holly led to a kicked attempt from Caoimhe which almost raised a green flag. Manister got themselves on the scoreboard with a goal and at half time Mainister led by 2 points.

Herbertstown started strongly in the second half and the defensive unit, which included Áine, Eva and Olivia, were tenacious in their efforts. Another free brought the gap to a solidarity point. Some nervy moments followed as numerous great attempts just tailed wide. It was starting to seem like it wasn’t going to be the girls’ day. Chloe was introduced to bolster the attack as Herbertstown refused to accept defeat. With time almost up, the ball broke to Aisling who escaped her marker and hammered a shot to the corner of the net. The final whistle sounded shortly afterwards and huge celebrations followed.

Manister principal Peter Lavin then presented a cup to a Herbertstown camogie captain for the first time. Massive congratulations to the girls and their coach Mr. Wixted! 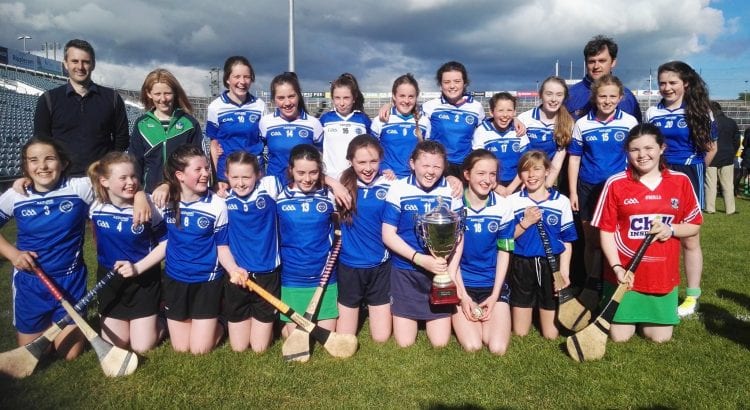 The South Limerick camogie team claimed the Neville Cup this afternoon in the Gaelic Grounds following their victory over West Limerick in the final. Well done to Aisling and everyone involved!

Our school has been represented with distinction in the past week on sporting and quiz fronts. 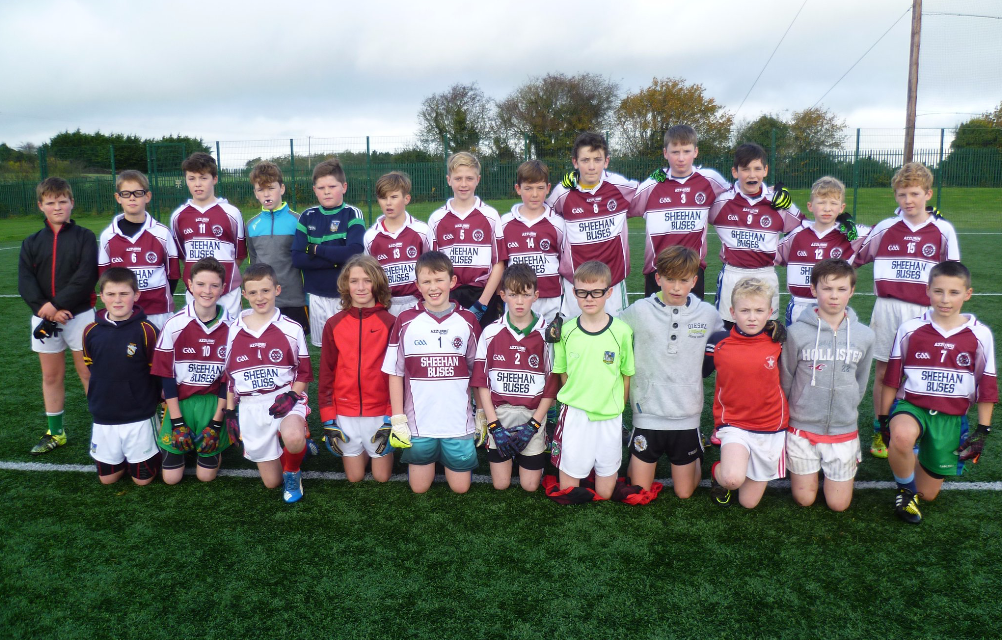 On Tuesday last, Ross & Jack were part of the South Limerick panel which defeated the City to qualify for the Sarsfield Cup Final. That final will be played on Tuesday November 22nd at 7.30pm in the Gaeilc Grounds. 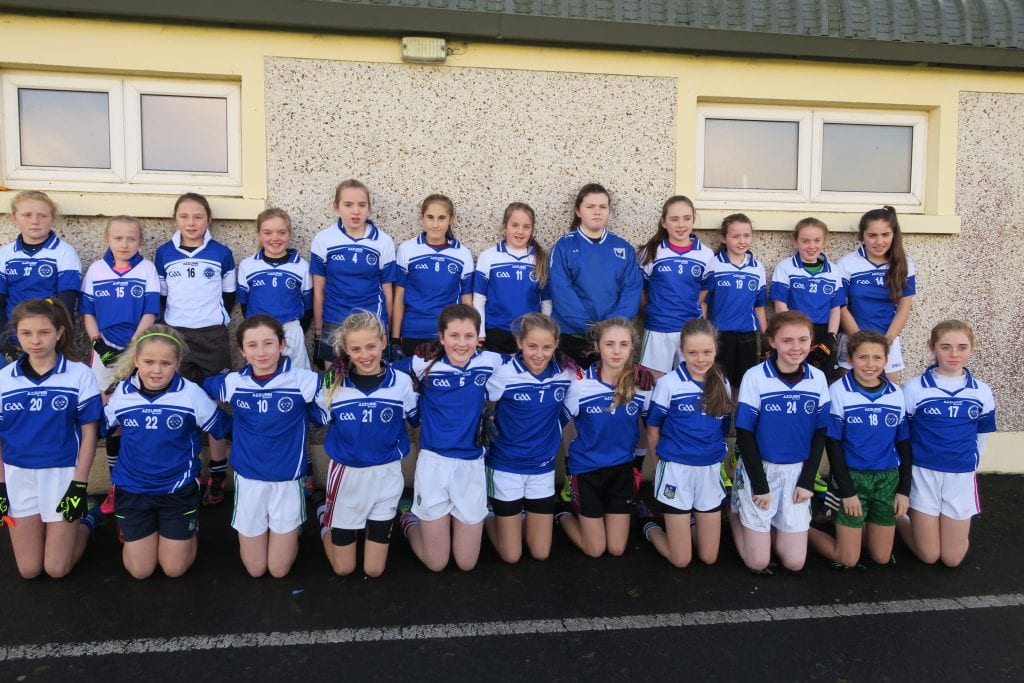 On Thursday,  luck was not on the side of the South girls team, which lost narrowly to the East. Well done to Aisling and Ailish who were part of the South panel.

Later that evening, the school entered two teams in the Marie Cormack Memorial Quiz in Glenbrohane. The two teams produced stellar performances to finish in third and fifth place respectively, with 22 teams having taken part.  The third place team received a prize for finishing in the top 3. Well done to all team members! 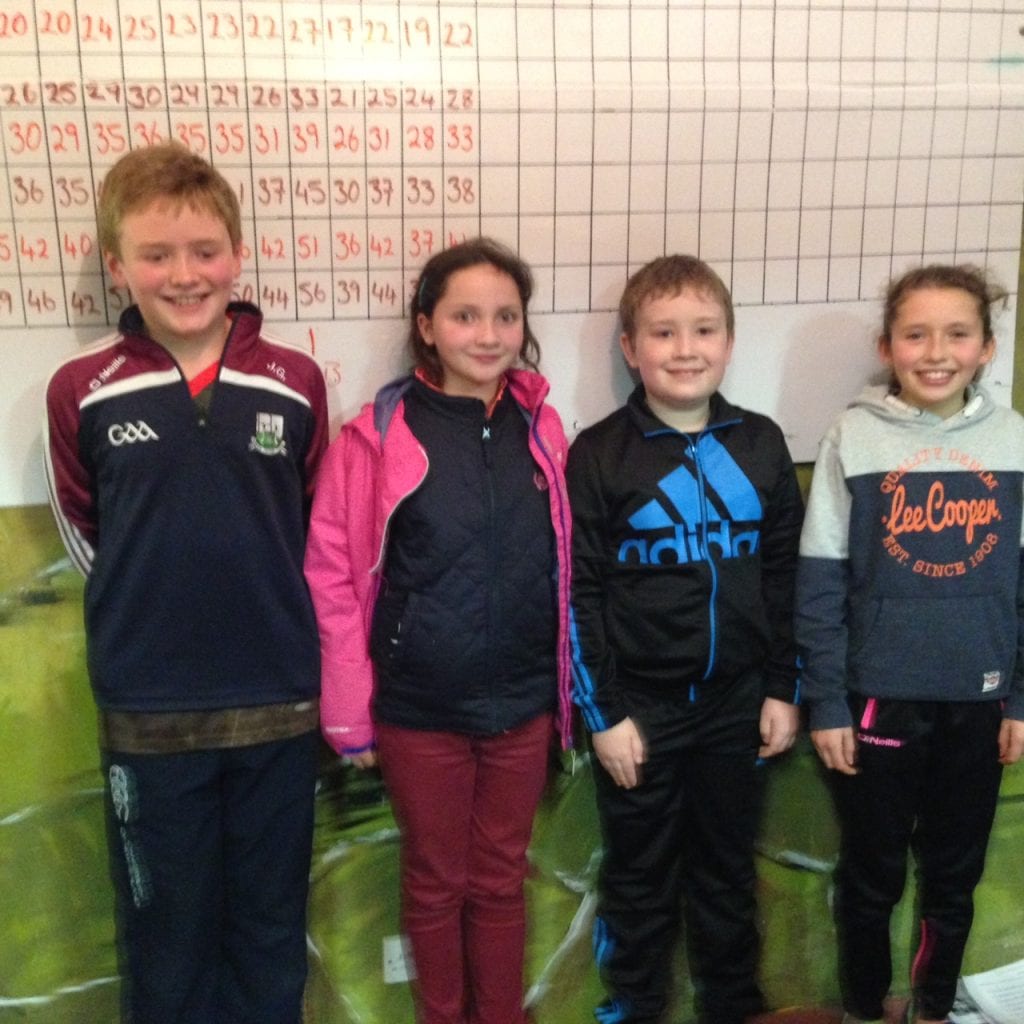 Our GAA season kicked off this week with both our boys and girls competing in the INTO Football Sevens.

On Tuesday, our boys team put up many good performances but met strong opposition in the form of Hospital NS and Bruree NS. They are now preparing for their 11 a side competition next week.

Our girls competed against Hospital NS, Bruree NS and Knocklong NS on Wednesday and, thanks to three victories, they emerged from the group as winners. They will now go forward to represent the South in the County finals.

Well done to all involved! 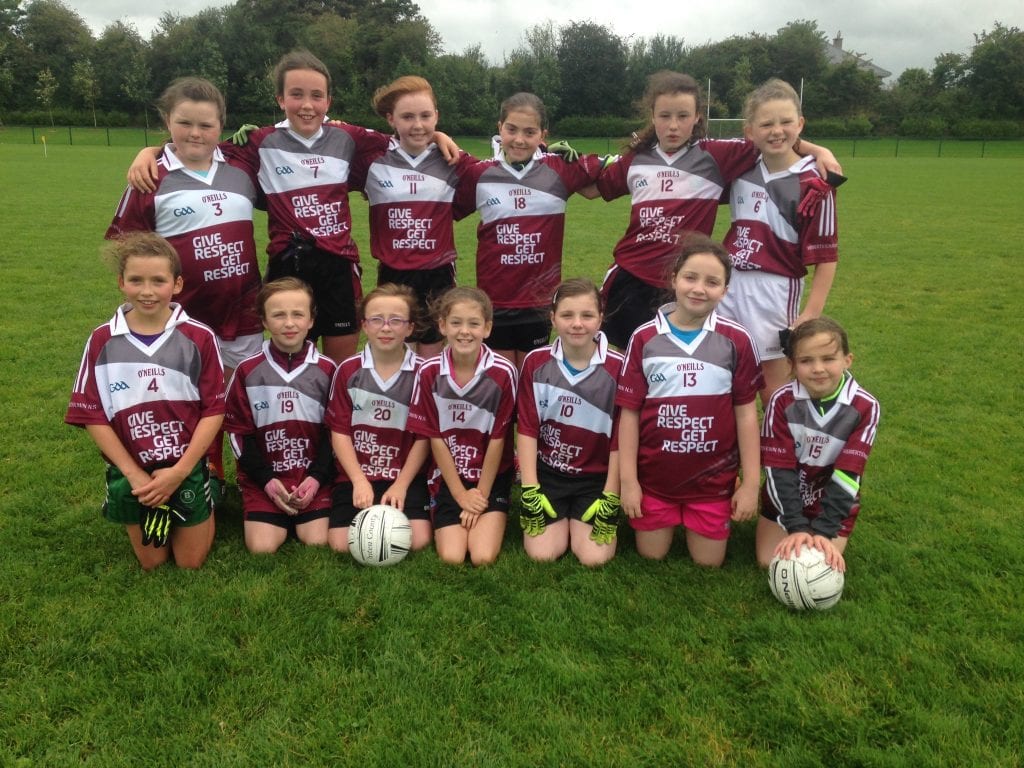 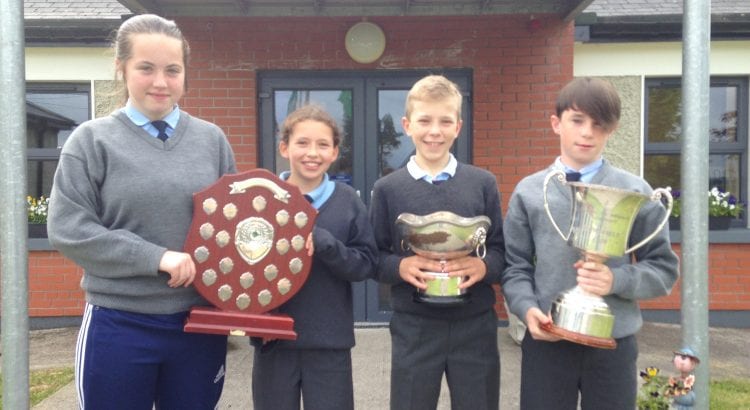 Well done to our representatives on South teams this year who captured the Mackey & Sarsfield Cups and the Larkin Shield. 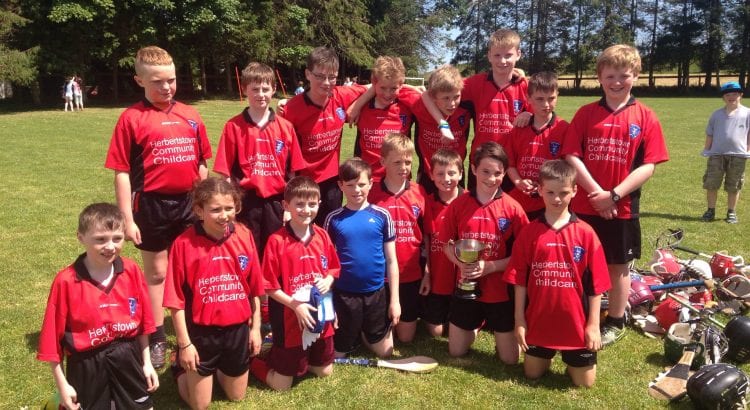 Our hurling team produced an outstanding display to capture the South hurling title today in Martinstown.

This game was played in glorious sunshine in Martinstown with both teams supported by a large crowd. The first half started off tentatively, with a couple of early well taken frees by Seán Murnane and Aaron Hanley settling nerves. Herbertstown started to take control of proceedings and the first goal of the game came courtesy of a long delivery from midfield which ended up in the Ballyagran net. Following this a barnstorming run from Adam Boyle rattled the net once again. The backs too were playing their part and an outstanding save from Ryan Hanley ensured Herbertstown kept a clean sheet in the first half. Some tenacious defending from corner back Declan Ryan McNamara was also key to this.

In the second half Ballyagran upped the ante and came back into the game with a well taken goal from play and a penalty. Herbertstown were not to be outdone and a strong defensive performance from Ross Winship, coupled with the hard work of forwards Patrick Bermingham and Euan Hickey stemmed the Ballyagran tide. Aisling Farrell was introduced in the second half which brought renewed energy to the team at a vital stage. With Ballyagran pressing in the final moments, full back Jack O’Sullivan made two telling blocks when a goal looked like the more likely outcome. The influential Seán Murnane worked tirelessly alongside captain Aaron Hanley right to the final whistle.

There were great scenes of celebration as Aaron lifted the cup, which was presented by a gracious Ballyagran principal Diarmuid Carroll. Well done to all the team and squad who have been training since February and today’s win was just reward for their efforts. 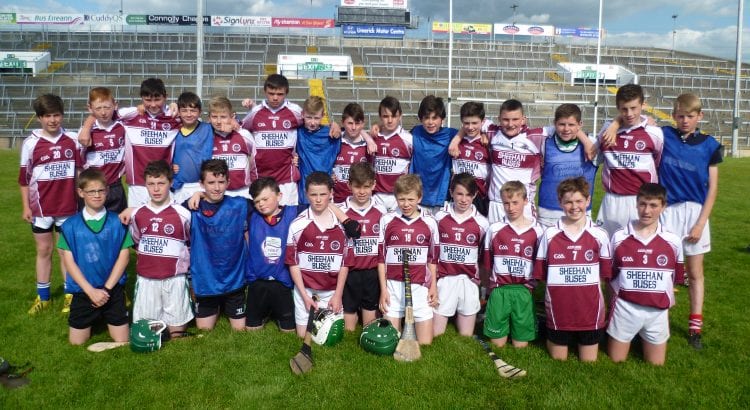 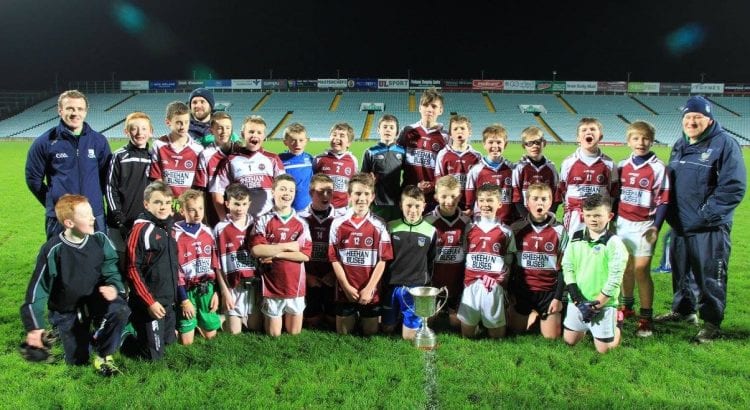 Well done to Aaron Hanley who picked up a coveted Sarsfield Cup medal with South Limerick. The south defeated the East in the Gaelic Grounds.